In 1995, the artist Meredith Bergmann was working on a film set in Central Park when she noticed something was off.

“I noticed then there were no statues of women,” said Bergmann. “There was a wonderful Alice in Wonderland sculpture, but there were no sculptures of actual women of note and accomplishment.” 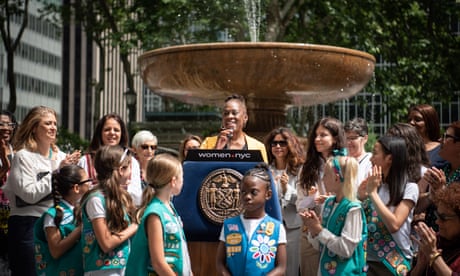 Now, 23 years later, Bergmann has created the winning design for a bronze statue of New York suffragists Elizabeth C Stanton and Susan B Anthony, who fought for women’s right to vote. Bergmann’s creation will be erected in Central Park on 26 August 2020, coinciding with the centennial of the ratification of the 19th amendment “Votes for Women”.

“The more images of women there are to look up to, the more inspired young women will be to aim higher and be more ambitious,” said Bergmann. “It’s really telling you: ‘don’t waste what these women did, go and vote’.”

There are only five public statues of real women in New York City (excluding fictional characters like Alice in Wonderland and Mother Goose), while there are 145 sculptures of men, including statues of William Shakespeare and Ludwig van Beethoven, who are both in Central Park.

“We are happy to have broken the bronze ceiling to create the first statue of real women in the 164-year history of Central Park,” said Pam Elam, the president of the Monumental Women campaign, which is backing the statue. “It’s about time that real women were represented in a monument.”

This site uses Akismet to reduce spam. Learn how your comment data is processed.